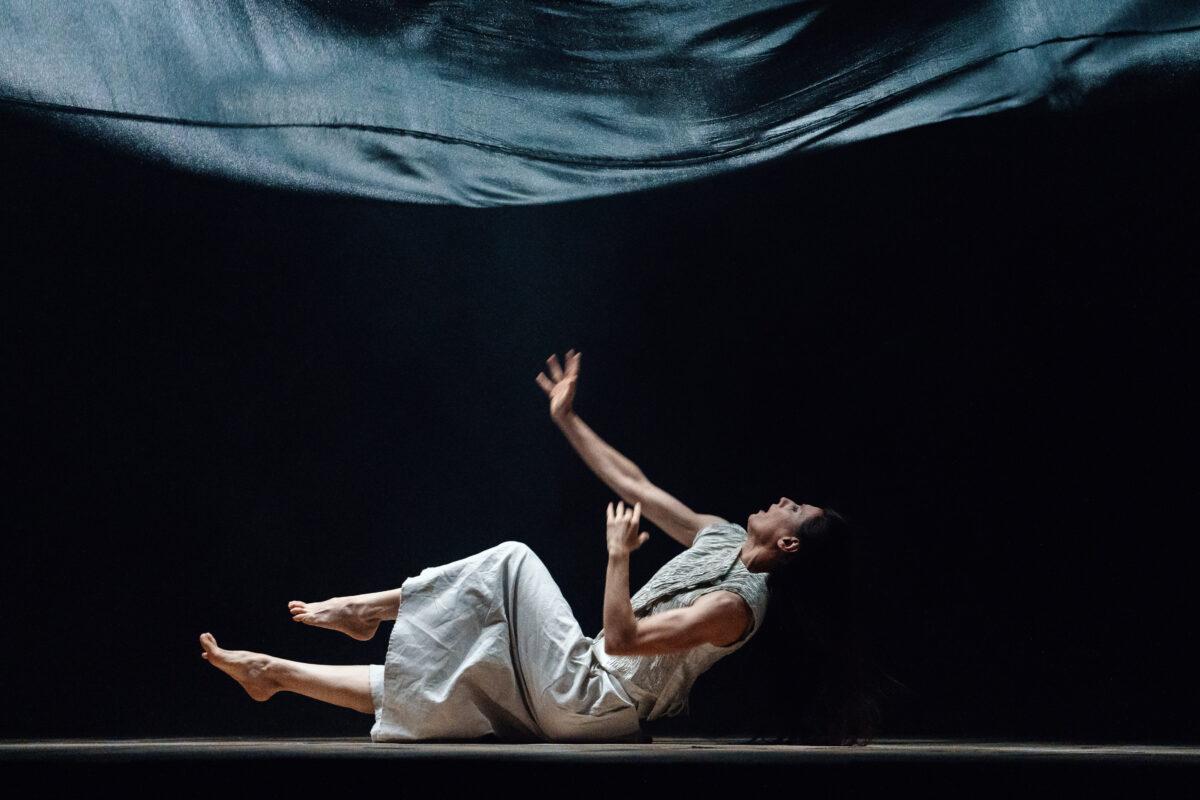 Interpretation, inspiration and visual statement are, as ever, clearly in evidence in the festival. Shakespeare as a source from which to explore spiritual, moral, political themes, express contemporary issues as well as face ourselves/each other often outnumber productions which set out to ‘play a Shakespeare’, namely, put on the play itself.

This could be said of the National Theatre of Turin’s production of ‘The Tempest’ since director Alessandro Serra took it upon himself to translate the standard English Shakespearean text into a vernacular that approximates more closely with the Italian translation from which the actors were working. This wise decision allows the nuances, intonational qualities and idiosyncrasies of the Italian spoken in different regions to come across more effectively as evidenced in the Neapolitan used by the actors playing Trinculo and Stefano [ Massimiliano Poli and Vincenzo Del Prete – both themselves from the city]. The choice also shows that Serra has listened to and chosen to be led by Shakespeare as opposed to using a play by Shakespeare to fly their own flag.

Enough of the verbiage, now to the production – a production rich in images, tableaus, colour and, thankfully, devoid of unnecessary mess. Sitting chatting, getting comfortable, looking at the rest of the audience, an audience, rather like Alonzo [King of Naples], Gonzalo, Antonio, Sebastian and Ferdinand with the comic duo of butler Stefano and sidekick, Trinculo, blissfully unaware that something is about to happen, and in case of the audience, that something has already started. Mist has been imperceptibly creeping into the auditorium long before the lights fade out. The wind starts its cacophony of moans, the seagulls screech and the curtain inches its way up – drawing us into not quite darkness. Not quite – no people, just sounds but peer into the dimness and there’s something there, a heap from which gradually rises a wall – a curtain that begins to buffet against the elements. Under that heap has been a creature, a white-clad dervish whose antics now reveal that it is them that is whipping up the movement – they are the conductor – a conductor who is having a jolly good time in the tumultuous storm of elements they are creating. We are in the Tempest.

Nothing is as it seems – this is theatre in theatre – with a director, Prospero, a disgruntled stage manager, Ariel who is distinctly unhappy with working conditions [ no days off !], a stage hand, Caliban, whose bitterness towards management is roared out the first time he enters – dramatically silhouetted against a misty background in a gap in the back wall. Actors – can ask questions – ‘ Why did you start this storm’, they might get a reply or, equally, the director can choose to put to sleep when in the way. Artifice, Art – the power of what Prospero has leant from his precious books – as precious as his daughter – is the temptation that makes him guilty of negligence – ignoring his responsibilities as ruler of Milan and which allowed brother Antonio in cahoots with Alonzo, King of Naples to usurp him, cast him and Miranda out to sea [ NB: survival rescue package of food and magic books hidden in boat by honest Gonzalo]. The good guys are in white, the others in various darker shades. Prospero brings with him light, when he exits the colours darken.

However, as Serra points out ‘ in the words of Simone Weil, “Whoever is uprooted himself uproots others.” Serra chooses to juxtapose Gonzalo’s benign vision of a ‘commonwealth’ of ‘no servitude’ with a vision of Caliban in servitude famed dramatically in a doorway of light bearing a peacock-like throne arrangement of branches as his working load. It underlines his dignity and the injustice he is the victim of. Prospero is guilty of robbing Caliban – heir to Sycorax , whose island he ‘invades’, usurping him then later enslaving him – hence the bitterness. Prospero releases Ariel from Sycorax’s punishment only to use Ariel’s magic for his own production. A working imbalance that Chiara Michelini [a refreshingly playful Ariel] tackles with a levity of tone along facial gestures / vocal mimicry which give spirit and vitality in highlighting the ‘bond’ between them. At one point she and Prospero bicker like two stereotypical Italian matriarchs – which perhaps helps lend understanding to the final scene of this production – Ariel alone in a shaft of light – released and then ….. .

On a stage devoid of set, the guilty and the innocent are brought together. Richly dressed in period jackets to emphasise their status, and, as the ever gentle compromiser Gonzalo notices, the fact that the sea water has not damaged but indeed, given their clothes new colour. These cannot hide the rotten nature of their natures. Cast away on this island, Prospero’s brother Antonio encourages Sebastian, younger brother to Alonzo, to grab this opportunity – alone on a desert island- to usurp his brother and seize the crown of Naples. History repeats. The fact that they are on an stranded in the middle of nowhere only heightens their guilt. By contrast, Alonzo thinks only of his son Ferdinand, lost to the elements. Revenge is not on his mind – remorse, regret – a worried, grieving parent is a better description with Gonzalo helping to ease his mind as best he can. Redemption is possible for some.

Hypnotised by Ariel’s ‘Full fathom five’, Ferdinand is enslaved by Prospero to prove his worth. With Brooke like simplicity, the plank of wood he bears as his burden becomes a sloping climbing board for a flirtatious Miranda, and next a tool for the antics of Trinculo and Stefano’s slapstick routine – from see-saw to a slap in the jaw board. It’s a compact device using both the horizontal and vertical to break up the space and entertain. Fun is allowed – farts and hiding under skirts, too. The slapstick serves to show how easily the clowns can be tempted by nothing – as evinced later through money they seeming get from selling their ill-gotten prizes and too realise that the coins are nothing. Insubstantial as the visions they have been fooled by – including a rack of costumes headed by a combination of red and white [ a comic touch for this performance?] Serra shows by this Caliban’s ability to distinguish between the magical qualities of the island, the ‘sounds and sweet airs that hurt not’ and that of the clowns’ fripperies. In an arresting moment, Caliban [a strong Jared McNeill] roars in protest at his new master, Stefano’s ignorance, rebelling in a trance of African-style dance – a physical powerhouse of dignity.

That plank invents itself as a banqueting table on which dishes of delights are set, around which in an elegant parody of courtly dance, Serra and Shakespeare hypocrisy within artifice against the integrity of truth. ‘Our revels now are ended’ – left disorientated, despairing and pitiable, it is Ariel who reflects ‘ that if you beheld them, your / would become tender’ with the final impact of ‘Mine would, were I human’ here directly prompting Prospero to ‘drown my book’. It seems that their working relationship has taught both of them – slaver and enslaved – uncomfortable lessons.

The three keys players end the production – Prospero, director – enslaver, relinquishing his power, acknowledging his neglect, Caliban – invested with his dignity and status – a message all the more pertinent in light of the current overdue exchange on slavery. However, it is Ariel, now released, whose manic display of confusion and loneliness ends with a despairing cry of liberty – despairing into a puff of ‘nothing’. Gone.