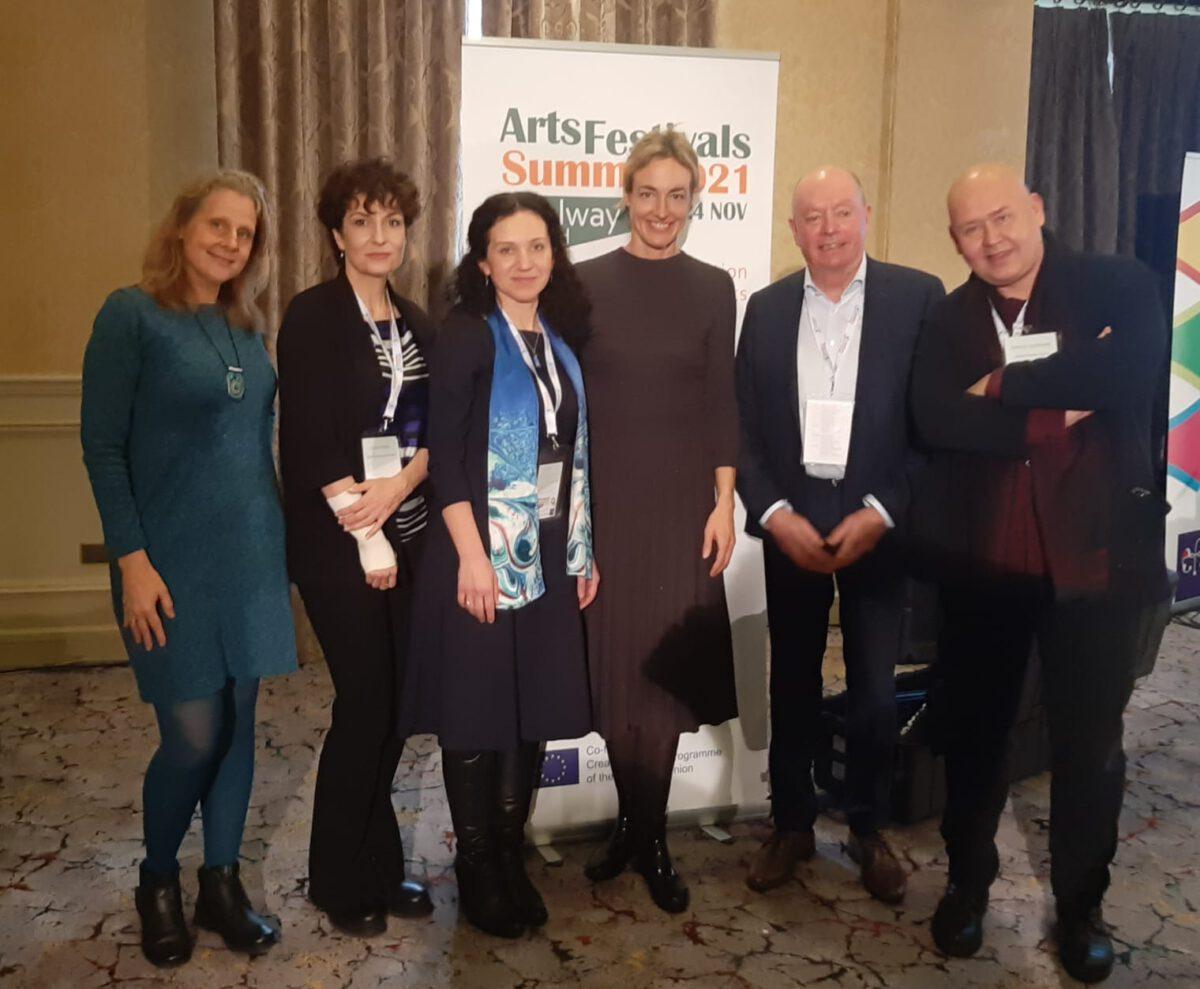 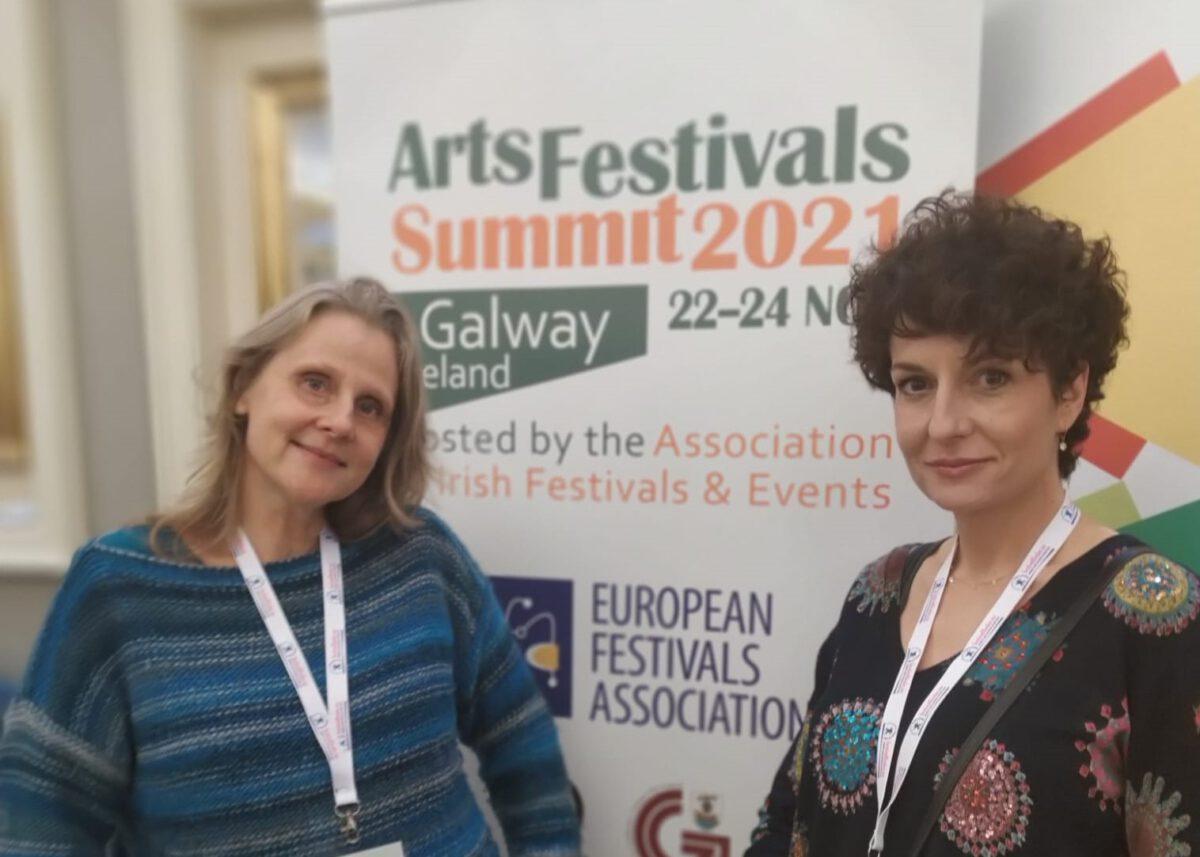 We take part in the EFA Arts Festivals Summit 2021 in Galway / Ireland, held on November 22 – 24 organized by: European Festivals Association (EFA), Aoife FestivalEvents and Galway – the European Capital of Culture 2020.

Agata Grenda, the GST Director and Joanna Śnieżko-Misterek, the coordinator of the Gdańsk Shakespeare Festival, were invited to co-create an important initiative, namely the development of European festivals.

Agata Grenda also took EFA’s invitation to EFA’s 70-Years-On Thinking Group – a group of 20 festival leaders dealing with the subject of sustainable development. The tasks of Thinking Group will include building the program of next year’s Arts Festivals Summit on May 2-5 in Yerevan and co-creating the European Festivals Alliance. 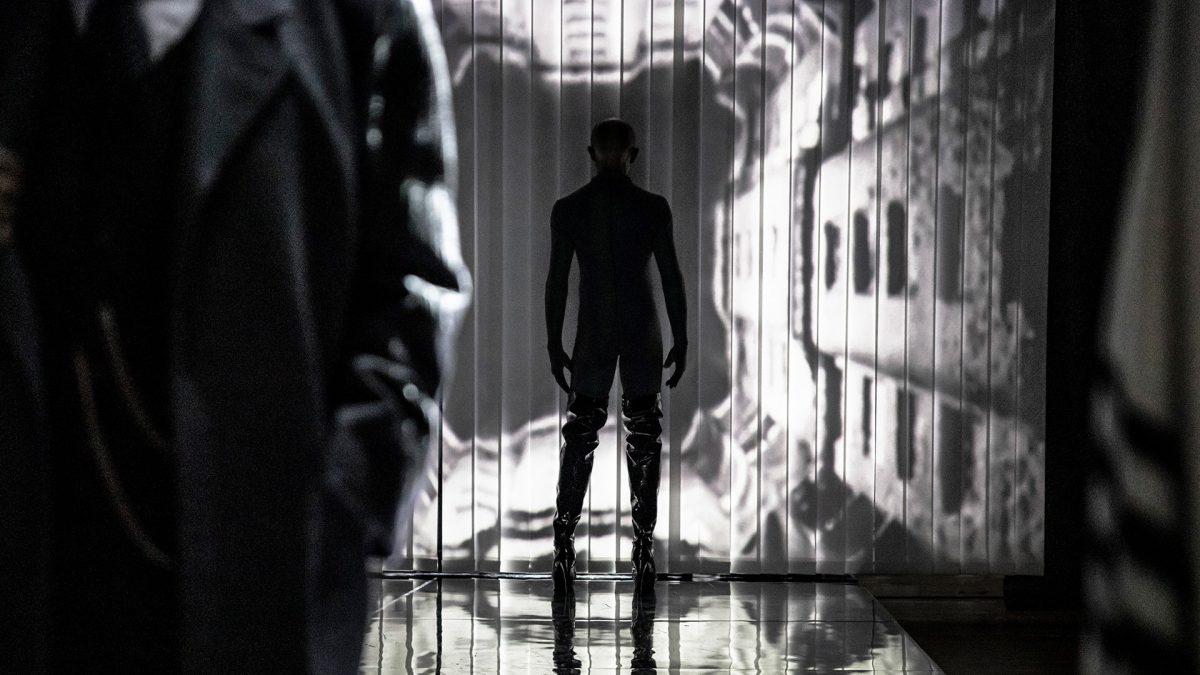 The 25th edition of the Shakespeare Festival in Gdańsk will take place from 30 July to 8 August 2021. We will see performances from: Portugal, Italy, Lithuania, Belgium and from Poland. The organisers of the Shakespeare Festival are the Gdansk Shakespeare Theatre and the Theatrum Gedanense Foundation. This edition is particularly special, not only because of the quarter-centenary of this prestigious event. It is the first time that the Festival will be held without its founder and artistic director, Professor Jerzy Limon, who passed away in March 2021. The programme of this year’s edition, however, is his creation.

The first own production by the Gdańsk Shakespeare Theatre will open the Festival – “The Tempest” by William Shakespeare, directed by Szymon Kaczmarek. The premiere of the play will take place on 8 July 2021. An important highlight of the 25th edition of the Festival will also be a work by one of Lithuania’s leading theatre makers, Oskaras Koršunovas, winner of the most important European theatre awards. His “Othello”, performed by actors of OKT Theatre from Vilnius, is already the seventh realization of Shakespeare’s works in the director’s career. Many of his productions: “A Midsummer Night’s Dream”, “Romeo and Juliet”. “Miranda” (based on “The Tempest”) were presented at the Shakespeare Festival in Gdansk, gaining recognition as the best performances – both from the audience and critics. As Oskaras Koršunovas says, theatre is an instrument that helps us to get to know ourselves and the society we live in better. He often reaches for Shakespeare’s dramaturgy, as he is one of the playwrights whose works reflect the patterns of the contemporary world.

Another highlight of this year’s festival will certainly be “Antony and Cleopatra”, the performance of Portuguese director Tiago Rodrigues, realised with the Teatro Nacional D. Maria II. It is a poetic and complex adaptation of Shakespeare’s play, inspired partly by Plutarch’s text about Mark Antony in “Parallel Lives”, partly by Joseph L. Mankiewicz’s film “Cleopatra” (1963). Tiago Rodrigues presents his own vision of the myth.

Lovers of world-class theatre will also be pleased by the latest production by the famous Belgian group Needcompany: “Billy’s Violence”. It was created by the Flemish director and visual artist Jan Lauwers. The performance is inspired by 13 tragedies of Shakespeare and will come to Poland right after the premiere in Barcelona. It asks questions about what violence in art means in the contemporary world and why we enjoy watching it so much. Is it perceived today differently than at the turn of the 16th and 17th centuries?
The 25th edition of the Festival will also feature the world premiere of the latest performance by the Italian group ImPerfect Dancers, whose expressive, beautiful dance performances have met with great acclaim from the Gdańsk audience during recent editions of the festival. After the previously realised performances: “Lady Macbeth” and “Hamlet”, the trilogy will be completed by the most famous love story in the world: “Romeo and Juliet”. 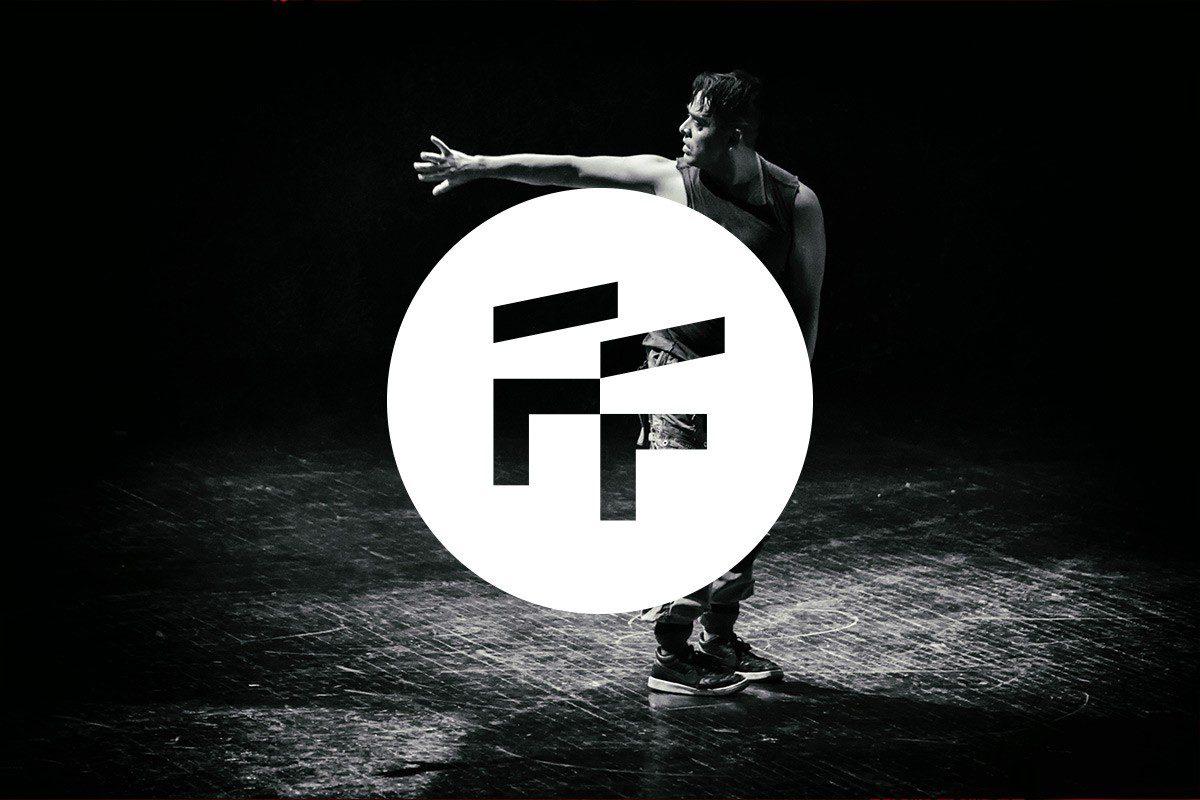 The prize in the ShakespeareOFF Productions Competition is financial support for the production of an artistic event based on the works of William Shakespeare. The premiere of the event will take place during the 25th Shakespeare Festival in Gdańsk. The funding equals PLN 10,000 for each winner of the competition.

The ShakespeareOFF Presentations competition involves completed artistic events, the authors of which, qualified for the finals, will present themselves to the public during the Festival and compete for financial prizes.  The overall prize money equals PLN 15,000. In the ShakespeareOFF Presentations Competition, the winners will be selected by a Jury consisting of three members: Anda Rottenberg, Piotr Cieplak and Małgorzata Sikorska-Miszczuk.

Finalists of the ShakespeareOFF Presentations 2021 Competition:

Both competitions are organised by the Gdansk Shakespeare Theatre and Theatrum Gedanense Foundation at the 25th edition of the Shakespeare Festival in Gdansk. The artistic events selected for the competition will be presented in the programme of this year’s ShakespeareOFF. 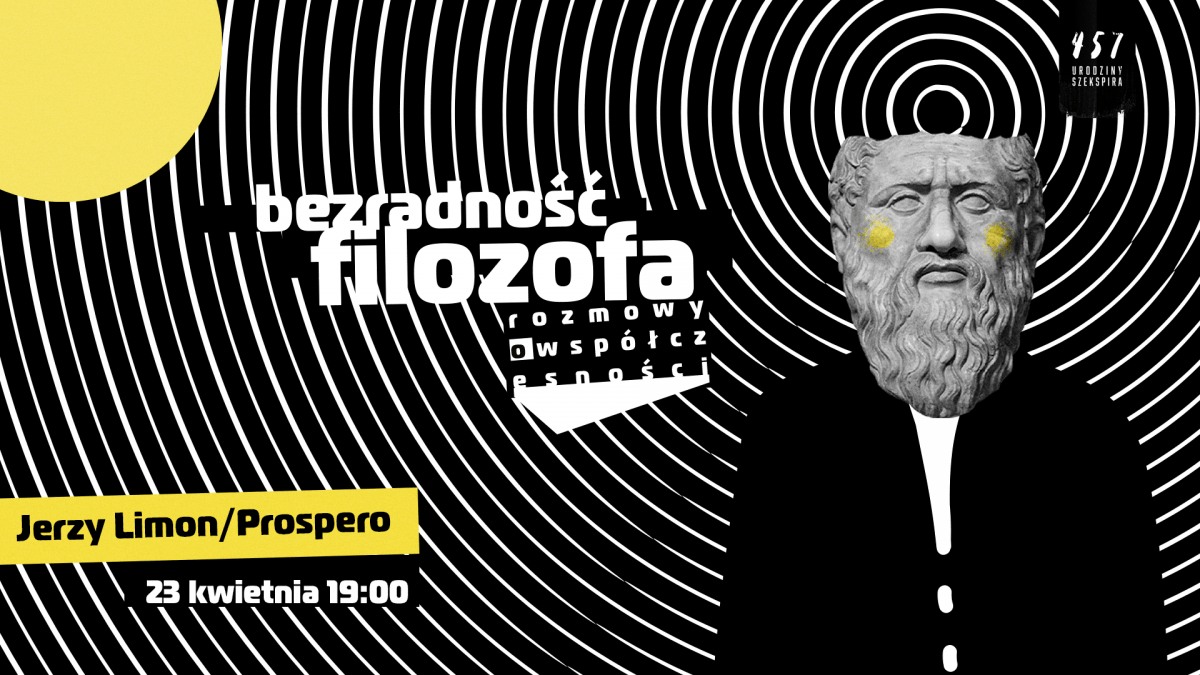 “Jerzy Limon/Prospero” – a discussion on 23 April, at 7 pm CET, initiating a series of debates
entitled: “The Helplessness of a Philosopher”.

We feel helpless in the face of this sudden and premature loss, surrounded as we are by a pandemic, political unrest, internal conflicts, environmental degradation, social inequality, disregard for art and critical thought, by spreading ignorance… This may be the reason why Professor Limon’s dream was to have a debate at the Gdansk Shakespeare Theatre on the helplessness of ‘the Philosopher’ who was for him someone thoughtful, considerate and sensitive, someone trying to grasp the complexity of the world.

We need to focus on the legacy of Professor Limon, on the challenges and tasks he left us to deal with; we need to examine his attitude to contemporary culture, the problems he grappled with, the helplessness he felt.

The discussion will take place on 23 April, at 19.00. The panellists will meet live onstage of the Gdansk Shakespeare Theatre; the meeting will be transmitted on YouTube and the Facebook page of the Gdansk Shakespeare Theatre. The participants are: Łukasz Drewniak – theatre critic, dr hab. Stanisław Rosiek – literary historian, writer, publisher, and Anna Augustynowicz – theatre director. The meeting will be led by Piotr Augustyniak whose idea this debate was. The accompanying artistic programme is directed by Robert Florczak.

The event will be transmitted in Polish, on the YouTube and Facebook profiles of the Gdansk Shakespeare Theatre.