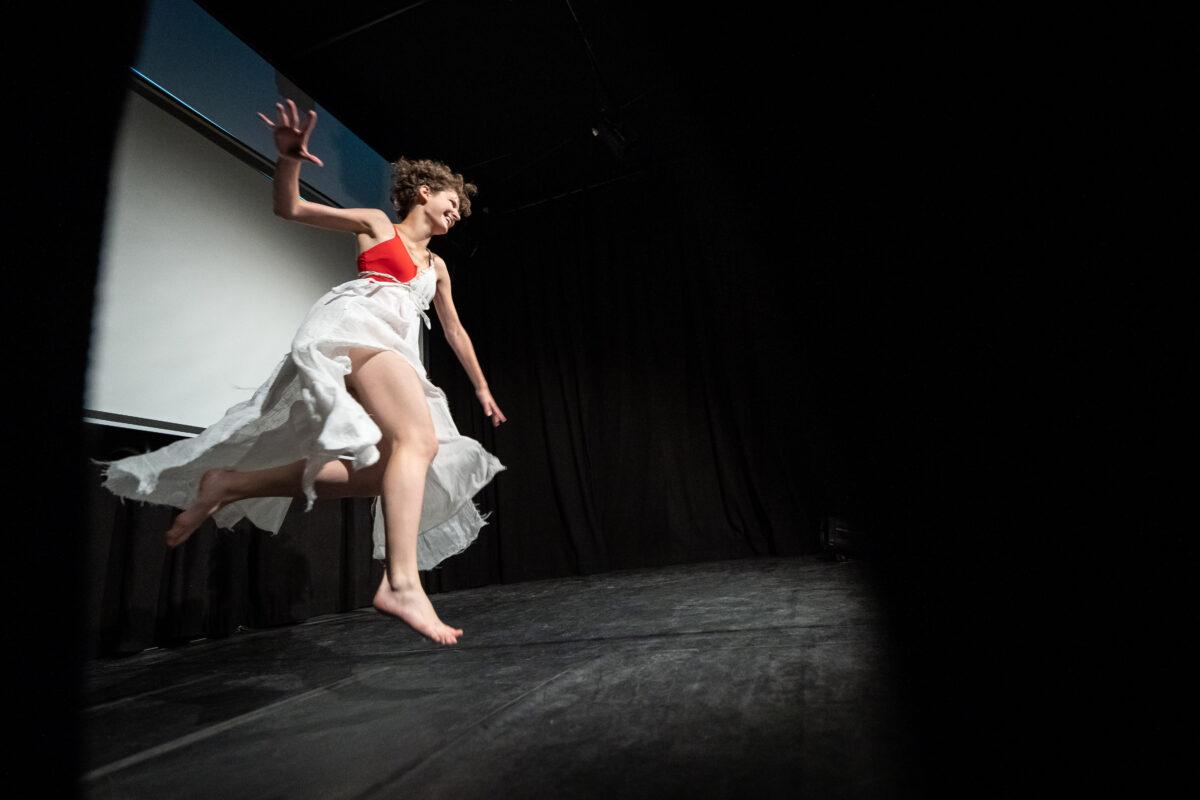 [According to the Merriman dictionary – ECE originates in the Greek word oikos, meaning house – home]

Rome February 24th – after the Rape of Lucrece or in 2022 read between the lines. Ukraine 24th February, 2022 – the Rape of Ukraine, the invasion of Ukraine. Invasive violation – since countries are often personified as female, the metaphor is not lost. The intimate playing space which Okna offers brings the proximity of the action very much close to home.

A young woman dressed in Roman style female drapery, her left breast encased in a red corset which might be red on many levels as defilement, suffering, Poland’s position in terms of distance and support – enters and starts dancing, swaying gracefully – reminiscent of figure from an Attic frieze or vase painting. Gradually, the dancing becomes more exaggerated developing into a Bacchic like frenzy. Over this come cab be heard a hauntingly plaintive female chorus of polyphonic Ukrainian folklore singers – it’s visceral statement which might work even more powerfully without its musical accompaniment.

Another memorable section of this 30 minute performance comes in the form paintings from across the centuries [ Thomas Cole, Nicolas Poussin, Pablo Picasso, Otto Dix ] in a display of massacre, destruction – killing fields in paint juxtaposed to key photographic images taken from the invasion of 2022. Images of bloodied women, disorientated, displaced, dishevelled which forcefully brings home the injustices and victims of war – predominantly women – vulnerable to attack – outside and inside. As high art and photographic reportage show – we are excellent at destroying each other and all around – it’s a recurring theme – timeless.

In the midst of all this is performer, Kristina Bila fighting valiantly to convey the plight of her country in extracts, the programme tells us, from Ovid, Taras Shevchenko, Lesa Ukrainka and Bila herself – given in English and Ukrainian. Apart from the technicalities of being heard, combining physical movement and word, the main challenge within Tetiana Shelepko’s piece is the amount of material, the messages and the images that she wishes to pack into a very short space of time resulting in a well-meaning, passionate concoction of leaps from one thought to another – never allowing time for both the audience and performer to develop these. Or is this analogous to an attack where there is no time, the focus is survival from moment to moment?