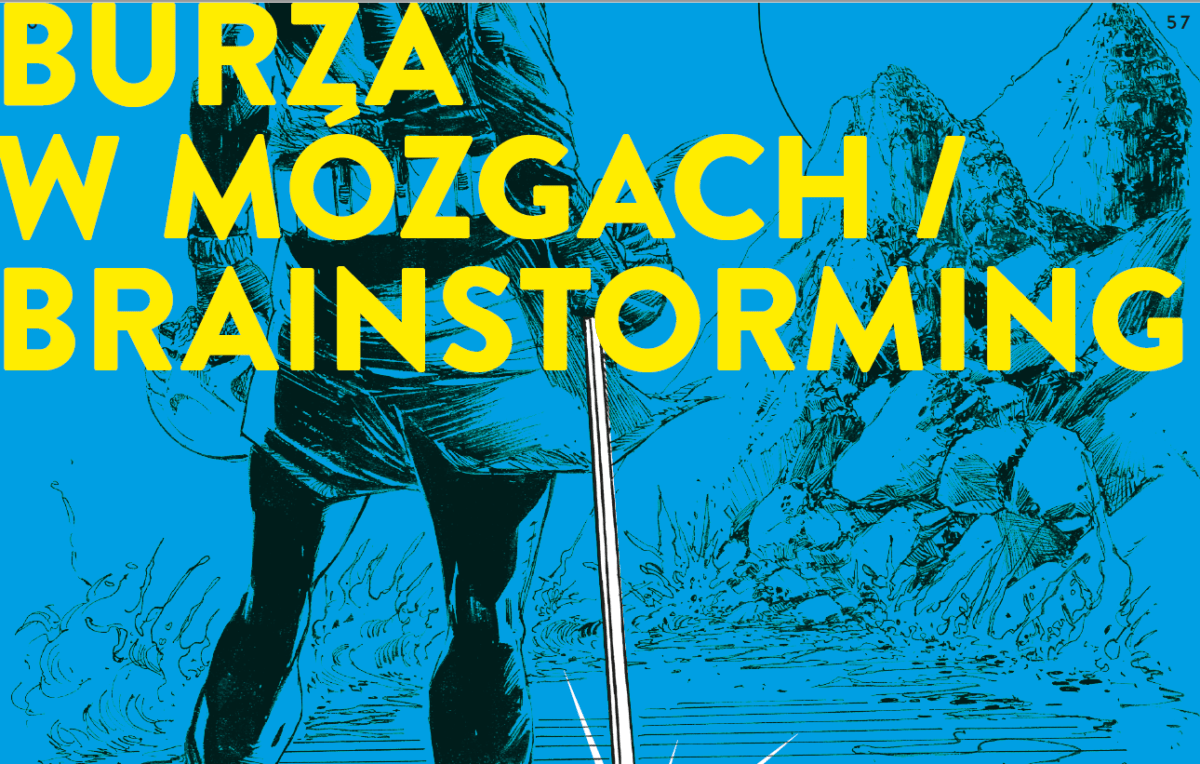 “Brainstorming” is a series of events accompanying the 26th international Shakespeare Festival in Gdańsk. It consists of workshops and meetings with festival creatives, open rehearsals and also events within the framework of two series “Together with Ukraine” and “Around comics”.

Together with Ukraine
The 26th Shakespeare Festival is being organised at a particular time – during a war which is being waged across our border. We are impressed that our friends – artists and activists from Ukraine – are still conducting artistic activities. Productions are performed online, in town squares, and even in shelters, e.g. one of the first plays produced during the war, “Hamlet drama per musica”, was performed in the cellar of the theatre in Ivano-Frankivsk. Theatres have also been turned into places offering help to refugees. Ukrainian festivals are trying to be active despite the extremely difficult circumstances. The Gogol Festival is trying to support the artistic community of Mariupol and, with the help of multimedia interventions, to bring about a realisation of the enormous role culture has played in the development of this city.

We have decided to invite creatives and representatives from Ukrainian festivals (Gogol Fest, Porto Franko from Ivano-Frankivsk) and also two directors present at our Shakespeare Festival (Tetiana Shelepko and Tamara Trunova) to address us and to tell us how the Ukrainian theatre is functioning during a war. We want to find out how we, the people concerned with culture in Poland and Europe, can help. We want to give our friends from Ukraine a voice, to participate with them, and support them. During the international Shakespeare Festival in Gdańsk, we will see “L_UKR_ECE”, based on “The rape of Lucrece” by William Shakespeare.  The premiere of this production was performed at the Shakespeare Festival in Craiova in Romania. Gdańsk will see its developed version. The creatives will also talk about the process of the creation of the performance and conduct workshops devoted to the recovering of relations with one’s own body after traumatic experiences.

Furthermore, for people from Ukraine, a 50% saving can be made on tickets for shows and 15% of the proceeds from sales of festival posters and gadgets on the basis of John Stanisci’s graphic works will be donated to the “Gdańsk Helps Ukraine” charity campaign organised by the Gdańsk Foundation.

A little bit of theory and a lot of practice! In the workshops, you will learn about the history of comics and the most interesting contemporary European trends. You will also learn the fundamentals of creating authorial comic studies: from the techniques of drawing with ink and recording bubbles, to wider compositions of boards and centrefolds. Each participant will try to independently create a work referring to the motto of the Festival: “Between heaven and the stage. After the tempest?” It must be remembered that a comic is not just a drawing – you will also learn the basics of storytelling, building suspense and turning points, as well as constructing a protagonist.

ShakeArt! is an artistic event initiated in 2021 during the 25th Shakespeare Festival in the Gdańsk Shakespeare Theatre. During the covid-19 pandemic, many artists felt a lack of strength for artistic activity and galleries remained closed to viewers. Reality without art became oppressive and empty. After a long period of artistic stagnation, there arose the idea to create an exhibition integrating creatives from various art forms. The project was dedicated to the memory of Professor Jerzy Limon.

This year, Polish and Ukrainian artists have been invited by the Arte Infinita Foundation to measure themselves against the “Shakespeare challenge”. Each artist had the task of painting a work inspired by a play by the Bard of Avon and choosing an appropriate quotation to be located under the painting. We will see works by local artists and those from Kyiv, Lviv, and Crimea. There will be large-scale works by Gdynia artist, Joanna Śmielowska-Jaremin, who has painted “Ophelia”, and batiks painted on silk by Wilga Badowska.

The exhibition will be the fruit of cooperation between artists creating with the use of different techniques and expressing themselves in various styles, active in both Poland and Ukraine. Shakespeare and his works are one common denominator uniting the participants of the exhibition.

During the exhibition, it will be possible to purchase paintings from the artists. The entire profit will go to the authors of the works. The Gdańsk Shakespeare Theatre and the Arte Infinita Foundation are not taking any commission for promoting the work of the artists invited to the exhibition.

TOGETHER WITH UKRAINE / DEBATE
30.07, 15.00, Gdańsk Shakespeare Theatre
The theatre in times of war

The artists will share their experiences from the last five months of the war in Ukraine. They will discuss the changes that have taken place in European theatre as a result of the influence of the threat of war and crisis. During the debate, they will present the productions and activities conducted by Ukrainian artists. The participants will consider what the “cultural front” is, how it operates, and how Ukrainian theatre influences Europe.

TOGETHER WITH UKRAINE / MEETING
30.07, Teatr w Oknie
A meeting with the creators of L_UKR_ECE – Tetiana Shelepko and Kristina Bila

The  meeting with John Stanisci is an opportunity not only to listen about the reality of life as an artist, a draughtsman, an independent creative, but also to find out what it is like to work for such giants of the comics sector as Marvel or DC Comics. To get to know from the inside the situation in the world labour market. To find out what circumstances might occur to help you develop, and also what challenges you will have to face. This is a one-off opportunity to listen to the individual experiences of someone who has spent his entire professional career in this very sector.

If someone has already taken the first steps on the road to creativity, you can bring your own portfolio to the meeting and discuss your work with our guest (listen to his advice and suggestions, and ask specific questions concerning your own interests and personal plans).
In English.

Classes based on the Bral Acting Method. Practical exercises will include work on the voice, the body, the imagination, and the skill of transforming them all into a consistent creative act. The classes are intended for actors (both beginner and professional).
In Polish.

AROUND COMICS
LECTURE
1.08, 15.00-16.30, Biblioteka Profesora Jerzego Limona, GTS
“To be or not to be” – Hamlet’s monologue in comics in various cultures in various years
Lecturer: Anna Wołosz-Sosnowska
Admission free

Shakespeare and comics? Yes! Shakespeare was present in comics as early as the 1950s or maybe even earlier. This lecture is intended to trace how comics changed, along with the approach of comics artists from various countries to the adaptation of Shakespeare’s plays over the years. We will pay particular attention to Hamlet’s best-known monologue, “To be or not to be.” The lecture is intended for not only those interested in comics and Shakespeare but also for those who wish to become acquainted with this phenomenon and learn how to read comics.
In Polish.

During the activities, participants will theatrically explore the theme of the cult of romantic love through work with the body and the imagination. Coming out of pop-cultural images of this motif, the participants will examine the complicated paths of feelings which, as a result of a magic charm, the young Shakespearean lovers, Hermia, Demetrius, Helena, and Lysander, will have to follow. They will also check how the words of Lysander resonate in the minds and hearts of contemporary youth “Thy love?…Out, loathed medicine; O, hated poison, hence.”
In Polish.

Shakespeare gives freedom to the actor. Freedom of the body, the voice, and the thoughts. In this brief workshop, intended primarily for beginner actors, we will try to approach Shakespeare with improvisation and practical body exercises.
In English.

previousNational Pass and discounts for Ukrainians