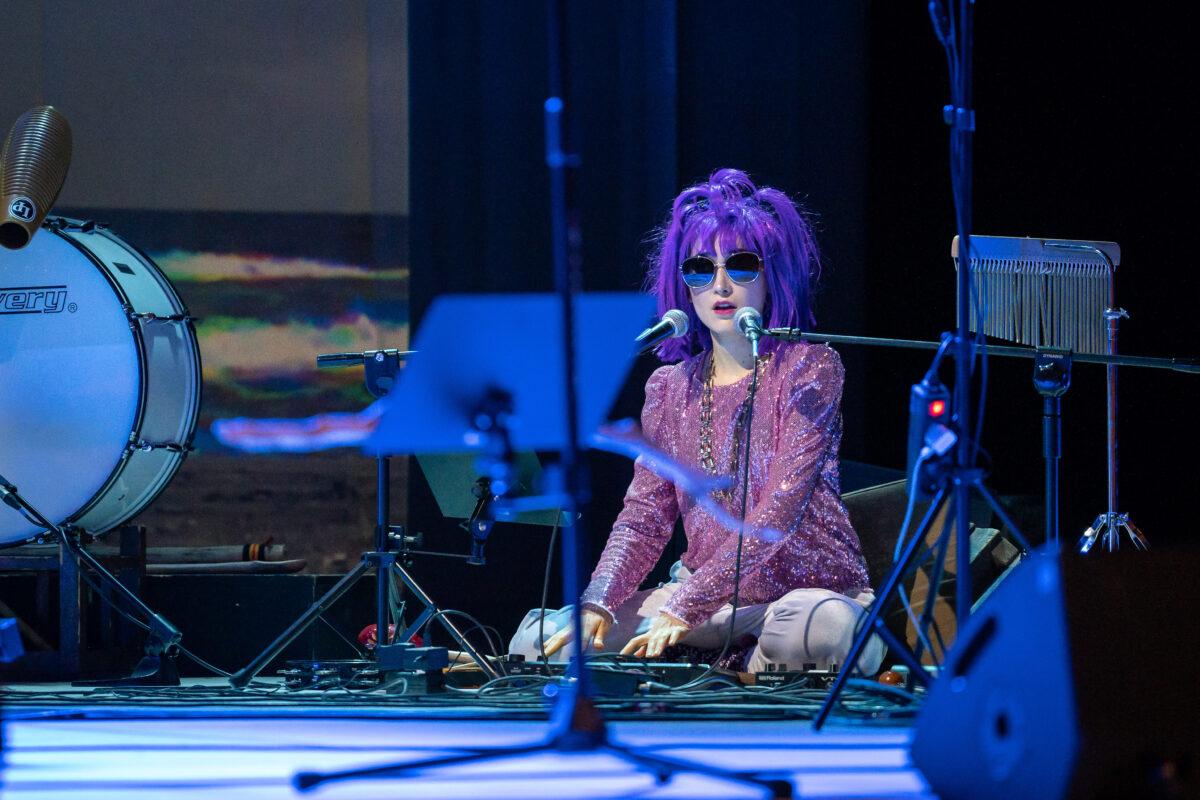 What was missing in this year’s festival was some belly-ache laughter, a dose of fun, the essence of ‘play’. On Sunday it had a double treat with Teatrul Bulanda’s ‘The Tempest’, and Divadlo Radost’s ‘Hamlet on the road’. Sadly, this reviewer was only able to catch the second half of Hamlet.

Play, playfulness, playing – The Tempest on Sunday had a field day indulging and releasing the sense of fun that underscores much of Shakespeare. Whereas in Polish sztuka [a theatre play ] and gra [ a game, children playing ] are different words with different associations eg: sztuka conveying the sense of artifice, artworks, exhibition and intentionally crafted display – [wystawiamy sztukę]. In English, a play [theatre] and let’s play [ a game ] are the same word and with that comes the fun. In Romanian, while a piesa de teatru = a play in the theatre and joca = a children’s game, the verb meaning to play a theatre play or play a game is related = joaca. At the Q&A session following the performance on Sunday, when the company were asked as to the meaning behind the staging, the actress/musician Anca Sigartau – in surprise – responded ‘to play’, in essence, to get playful. Why always go for the gloomy, tragic element; there is enough of that in the real world? The island we have come to is another place – full of magical sounds, not artillery or bomb explosions. On this island, it’s a case of:
‘He’s [or we are] ‘either alive or dead
And this is life or the afterlife, instead

Lights up. It’s a stage or is it a recording studio? Mics, music stands, cables everywhere – it’s a musician’s jungle of delights. Projected behind all this is an idyllic seashore, an endless sandy beach, waves – dappled in various luminous colours – rolling and breaking as they meet the land. Holiday time here we come? Rummaging around on stage, tweaking, testing equipment, patting a garden frog [not real] downstage, then settling down at the keyboard placed upstage, is Kermit. A character, not a frog, all in green who seems to be, amongst many tasks, stage managing, creating the music and sounds for the island from her keyboard as well as reassuring – ‘He won’t bite you again ‘ and cajoling ‘Cali-Cali-Cali – banoooo’ – an extremely hesitant Caliban to come out and play. Kermit is Ariel, but there’s another sound mistress, all in pinky-purple, making strange growling sounds and other noises. Is this Miss Piggy? Have we come to a desert island Muppet Show? Is the tallish guy in a dressing gown affair [Prospero], a version of the Muppets’ grouchy old men mouthing off a ‘Bugger off’ to Caliban’s ‘the red plague on [rid] you’. However, on this island, as in the Muppet Show, it is Kermit with the assistance of Miss Piggy who is the Mistress of Ceremonies.

To add to the mischief, faces, belonging to victims of a storm at sea, appear projected on the screen but, in fact, the players, playing out this, are visible on stage where they have set themselves up huddled around one of the mics in the orchestral set-up forest – ‘Help, we are sinking’. Rather than being ominous, it’s a playful way of adding another area to the visible space, panning up to their faces pivoted at different levels, to create the illusion of submerged confusion.

This production plays on wit, Muppet Show flair, a palpable desire for sheer unbridled fun decked in seemingly inconsequential rhyming. Listen/read again for it is the ingenuity of the rhyming verses which shadow the originally so wittily [the Bard might wish to steal a few ] that reveal how much Bulanda have taken on board the words of Shakespeare’s The Tempest freeing them to capture the opportunities of a humorous approach which works in tandem with Shakespeare. Listen more closely to these couplets. Apologies for these approximations scribbled in haste by this reviewer as the lines kept coming thick and fast.

Prospero explains ‘ While I was studying intricate things, / He [Antonio] was pulling political strings’ which led to Antonio disposing of Prospero and daughter, Miranda ‘in a leaky little boat/Which couldn’t keep afloat’ and where‘ We were lost in the tide /And I was terrified’.

Reneging on his ducal responsibility, Prospero is usurped by Antonio who takes Milan as his own leaving his brother and niece at the mercy of the elements. Ariel as stage manager interjects ‘I was in charge of the soundtrack/It was me who caused the skies to crack’ A couplet summarizing the powers Prospero has harnessed by enslaving Ariel : I come / To answer thy best pleasure. Be ’t to fly, / To swim, to dive into the fire, to ride / On the curled clouds, to thy strong bidding task / Ariel and all his quality.

Now on the island, Miranda spies a strange human form ‘ A spirit I never saw before / He is crying somewhat sore’ which is no doubt a result of this strange form, Ferdinand, hearing ‘You’ll die, you’ll die / As the fish go by’ . Ariel adds, in a memorable version of the song, ‘Full fathom five / Alas now floating on the hungry sea/Dad’s become salt-crafted jewellery’. Full fathom five in a nutshell, leading Ferdinand to conclude ‘Our ship has run aground/And my father’s drowned’
Miranda sings of her discovery ‘I liked him at first sight/I feel I was absolutely right / I have a feeling I was absolutely right’ setting us up for their exchange of feelings including a heartfelt ‘I crush and I blush / I crush because I’ve got a crush/ Hard labour doesn’t make me blush’ as he undertakes Prospero’s tasks to prove his worth culminating in a touching meyoumeyoumeyou rendered as a playful duet of ‘tu’ ‘tu’ [you/you]. It’s makes its point – with comic timing thrown in – silence and then a crush. Indeed, is this a love ‘ a crush’?
Antonio, here a composite of Antonio and sidekick, Sebastian, notes in self-seeking style to Alonzo, in turn, a composite of Alonzo and Gonzalo, ‘Rejoice we are safe and sound/I guess that everyone else drowned’. The bathos is exaggerated in a burped innuendo of Oh! Ow! OooH! Owe! – between two wig-headed stately figures. Is this a reaction to Ariel’s warning ‘Time to think of Judgement Day’ emanating out from the magical noises of the island? Meanwhile, Gonzalo’s vision of a commonwealth of equals is rendered as ‘I’d send them to bed/ And get them to dream instead’.

Ariels’ chorus of growls and Cali-Cali calls lure a pitiable Caliban on, shell gloved, clutching an attache case [ is this all he has left of his status as heir to the island?], whose guitar plays piano keys to state ‘This island is full of strange sounds’ as has been heard/shown in the witty recording studio staging conceit. Despite his hangdog expression, his rhymes ring home when mentioning the island: ‘Prospero spoiled it with civilization/The island was my mum’s / it was her donation’. The Tempest on holiday in iambic pentameter mode, with a darker edge – in light of global warming, political cheats and warring powers.
In a world where the beach turns vertical, Stefano comes to the conclusion ‘I’m fed up with the sea – no more / I want to feel the shore’. Noticing his rhyming words, he spots a plan ‘Why sail the seas to earn my daily bread / Think I’ll become a poet and write verse instead’ while harnessing the services of the local inhabitants through calculated cross-cultural exchange ‘Please help yourself, don’t be shy / The quality of my liquor’s high’ leading to Caliban’s belief that this new master will share his dreams ‘We’ll raise snails within their shells’. Alas, this is not on Stefano or Trinculo’s agenda.
Suddenly, it all vanishes – ‘all melted into air, into thin air’; it is time to make a choice between ‘We are either all alive or we’ve all lost our lives!’ You decide.

With a cast of five playing all parts, the company at one, logistically impossible, point get more inventive, as if reinforcing their joyfully novel ability to celebrate playing, by turning a stick on a wig into Alonzo, who in turn becomes Prospero, while Antonio becomes Ferdinand at the drop of a wig, and Trinculo transmogrifies into Miranda in front of our eyes. Ariel remains Ariel – in two. Bulanda’s Tempest fizzes with energy which could be even sharper were it slightly shaved of a few repetitions. Cutting a good ten/fifteen minutes would give a pop to this flask of bubbly.

Read what you may into The Tempest or why not, sit back and play along – after all, it’s only a play. When you are gone ‘No sound will ring upon my shore – anymore’ Like the two grumpy old men of the Muppet Show, Prospero has the last word.
Thank you Bulanda for bringing some fun / back into William.

previousROMEO AND JULIET and other catastrophic love affairs - Audience Survey