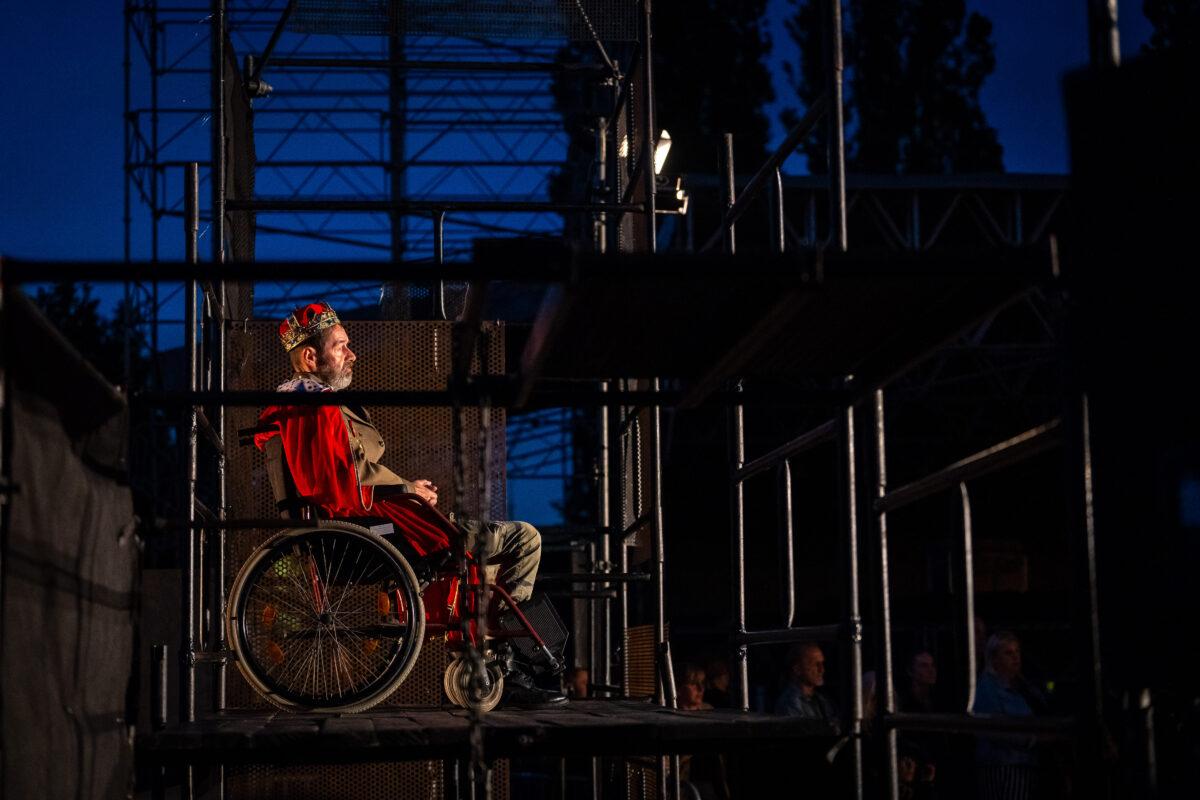 For a staging of Lear, Plac Zebran Ludowych is no bad choice. Already as one winds ones way up from the Al. Grunwaldzka, away from the traffic, enters and crosses the empty wastes that used to be Gdansk’s fairground, there is a sense of distance from the tamed actual to the exposed, unpredictable artificial.

What greets the audience are three, skeletal scaffolding structures raised high above the ground thus easily visible which, practice must have taught this company, let the audience get to exercise their eyes and senses more than just looking comfortably straight ahead. Moreover, to augment this activity in the audience, most of us were standing so involving subtle interaction – audience brushing up against audience, reminiscent of how most of the Elizabethan audience saw their Shakespeare. Convenient for slinging the odd apple core [or worse] should a performance fail to satisfy. Back in Plac Zebran seating was a single row of chairs around the parameter of the rectangular acting area.
Three women, dressed in black, enter, scale the platforms which are pivoted into various interlocking positions by an entourage of savage looking men, also dressed in black. Elemental in black. Thus begins a cacophony of declarations – or are they incantations Are we in the Scottish play? Are these hags instead of attractive ladies? Are these witches meeting on a barren heath to orchestrate the fall of a man? Three women, in the gloom – ranting, encircling an imaginary cauldron? To delightfully bamboozle, they acrobatically switch places – these magical three.

Meantime, Lear appears at one end – a craggy, frail, stick-legged figure winching up to a perch high up on a platformed throne – A Part from the action. Beady eyes watching, assessing, regretting ? A crown squashed on his head – decrepit in form and reason. Connections are made – witches can be daughters, can’t they? It’s a novel approach with a lively streak of black – humour underneath which is no bad thing.

Teatr A Part – have done what their name suggests, very sensibly taken a small part of this toweringly magnificent play, and honed in on ‘Nothing’, for what can Cordelia say? Goneril already declares ‘ All that is ours is yours’; Regan that ‘ only You count, only you.’ Case stated, done and dusted. Fathers and daughters – complicated – even in a setting where the 2012 Euro cup was televised years ago with hordes of Fathers and sons communing in testosterone.

‘How can you say that’ – Lear responds to Cordelia. ‘Nothing will come of nothing’ – which of course it does as far as the Shakespeare goes. Blood baths, electric language, harrowing expressions of revenge, greed, lust, rendered in some of the greatest verbal creations in the English language.

In Plac Zebran Ludowych, instead three actresses share their personal memories and feelings towards their own fathers. Technically, this suffers as not much could be heard – especially for those standing in the back. To address this, the company did supply a script – helpful. Frustrating as the notion of hearing the voice and confession of each actress as herself in close proximity to us sharing own parent/child story in contrast to the character she is playing up on the platform is a pertinent one. Sadly, this was marred, yet perhaps that was the intention – to hear, we the audience, were required to work for it – strain, jostle and make audio connection in order to get insights into three contrasting relationships, three unique journeys; real life against the backcloth of a theatrical icon. Their own stories naturally are relatable, emotional, human; their bond to their father complicated and true. A stark contrast to the bonds determined by money and power, even ‘Nothing’.
When the spidery husk of Lear negotiates his way down from his perch with the help of the shoulders of the grim looking entourage and crutches appear from nowhere, a cascade of curses blast forth spawned by the reflection.

‘Who the fuck am I? Who?’
Who were the fathers of the actresses in themselves, who is a ruler who abdicates power, who is a father who screeches ‘oh you bitches’ at his offspring? Who is worthy of the name?

The world falls A Part as bestial, wolf / hyena forms on stilts – masked, naked – ‘ unaccommodated man ‘ [or woman], under gangster style long leather coats, confront, parade, challenge; order is entering into a world of disorder. Filial loyalty, care and pity, in a society where God and the fear of damnation were ever present, has been subverted. Though the world Lear seems disconnected from the latter, the audience of the time were. The wolf pack looming down from their stilted height are the same actors, in different guises, who play Goneril, Regan and their entourage. Cordelia could be there, too. Subliminally, Lear’s summation of mankind reverberates in the truth on stage: ‘Thou art the thing itself: unaccommodated man is no more but such a poor, bare, forked animal as thou art.’. Unlike ‘Poor Tom’ to whom Lear addresses these words, the visions in ‘Lear, for fuck’s sake’ are another version of man’s choice.

Here, the overused, and thus inconsequential, effect of nudity seen so often on stage locally is justified. It’s nasty, it’s base, it’s carnal. Lear, Fuck curses ‘ You bitches [ a female dog ], you whores ‘ in a mantra of verbal fucks. What has he unleashed, was he wise and good? Indeed, is he wise and good. ‘Wisdom and goodness to the vile seem vile; filths savour but themselves’. Morality is dead – ion the barren heath of Plac Zebran it’s a ‘fucked’ up world, Lear.

Metal teeth rotate, platforms spin into line as sides in the power struggle are taken and changed. Health and Safety officers switch to red-alert as the entourage power up chainsaws. High up on a gangway of ramps and scaffolding a deadly confrontation staged as a stylised courtly-dance is taking place. In contrast to the intimate confessional, Lear’s demands and the earlier tri-partite fusion of sisters, this is a frenzied study of greed, lust, disloyalty and confusion. The power tools emphasise the clash of political and sexual power houses. At one point, in a visually striking scene, a masked female wearing a headdress- wedding train trailing fire enters in an eerie display of light against the surrounding gloom – ‘if only to go warm were gorgeous, .. nature needs not what thou gorgeous wear’st,’. In the choice of images and confrontation that A Part have honed in on, the company have ‘rippled’ out into connections with Shakespeare’s actual text. One subtly triggers the other.

Unlike other more established companies performing this year, A Part understand the necessity for vocal modulation, a change in pace and eye level – they require the audience to physically commit to the experience [ standing, turning, peering, eye levels ] in the [dis]comfort of a wind-swept, chilly piece of wasteland.

The venue fits the nature and impact of the piece – ‘Humanity must perforce prey on itself, Like monsters of the deep’. ‘Lear, for fuck’s sake’ – what have you released?

nextROMEO AND JULIET and other catastrophic love affairs - Audience Survey