John Stanisci, one of the top artists on the New York Times bestseller list, is the creator of the poster for this year’s international Gdańsk Shakespeare Festival. As a comic-style rendition of the Festival’s motto, “Between the Heavens and the Stage. After the tempest?,” the poster reflects the spirit of the times in which the remarkably relevant works of William Shakespeare will be staged.
Stanisci is also one of the jurors at this year’s Festival.

John Stanisci is a versatile artist. On the one hand, a bestselling graphic novel artist and writer, on the other, an artist who has drawn Spider-Man, Batman, Constantine, Justice League Dark, Judge Dredd, X Files and many more for DC, Marvel and IDW Comics—the most iconic and most popular comic book publishers in the world.
In 2011, John Stanisci’s book for DC Comics, Batman Beyond: Hush Beyond, went straight to #1 on the New York Times bestseller list for graphic novels. John’s original graphic novel projects, Lifedeath, Foundlings and Gladiatrix, received major announcements in The Hollywood Reporter, Deadline and more. His work has been published in countries including Germany, England and France. In 2020, he was a guest panellist and inspirational speaker at the Universe of Creators conference in Colombia, alongside luminaries from NASA, AMAZON, SPACE X and more. He promotes the art of writing and creating graphic novels, runs workshops and seminars all over the world.

But John Stanisci is also a Broadway/Off Broadway actor, producer and playwright. His plays, including American Dream, have been nominated for the prestigious Woodward/Newman Award for drama and invited to the National Playwrights Conference, founded in 1964 at the Eugene O’Neill Theater Center in Waterford, Connecticut. The Conference is the USA’s premier institution for new play promotion, production and support.

His plays have starred such well-known actors such as Tony Award (Broadway’s principal honour) nominee David Morse, Oscar winner Kathleen Turner, SAG (Screen Actors Guild) nominee Sarita Choudhary, and Obie Award (Off-Broadway chief distinction) winner Tamara Tunie, to name just a few. In 2009, John Stanisci’s Theater Company, Invictus Theater, brought the play Irena’s Vow to Broadway. It tells the story of a Polish woman, Irena Gut-Opdyke, who during World War II hid more than a dozen Jews in the basement of a high-ranking SS officer. It was the first-ever production to be staged at the United Nations Headquarters.

“I’m really excited to have been asked to design a poster for this year’s Festival. I wanted to capture the opposing sense of power and isolation present in Shakespeare’s The Tempest. But I could not forget the events currently unfolding in Ukraine. So I tried to depict an actor standing on a stage, who boldly approaches an unknown island, against the background of very strong blues and yellows, the colours of Ukraine. I wanted this image to convey, on the one hand, the power of actors and theatre to give hope and comment on reality and, on the other, I felt the need to acknowledge the valiant Ukrainian heroes, who are supported by the whole world yet remain alone,” says John Stanisci.

John Stanisci will be one of the five jurors at the 26th international Gdańsk Shakespeare Festival.
John Stanisci’s website: www.johnstanisci.com

15% of the proceeds from the sale of the festival posters and merchandise produced by the Festival based on John Stanisci’s graphics will be donated to the Gdańsk Helps Ukraine campaign run by the Gdańsk Foundation. 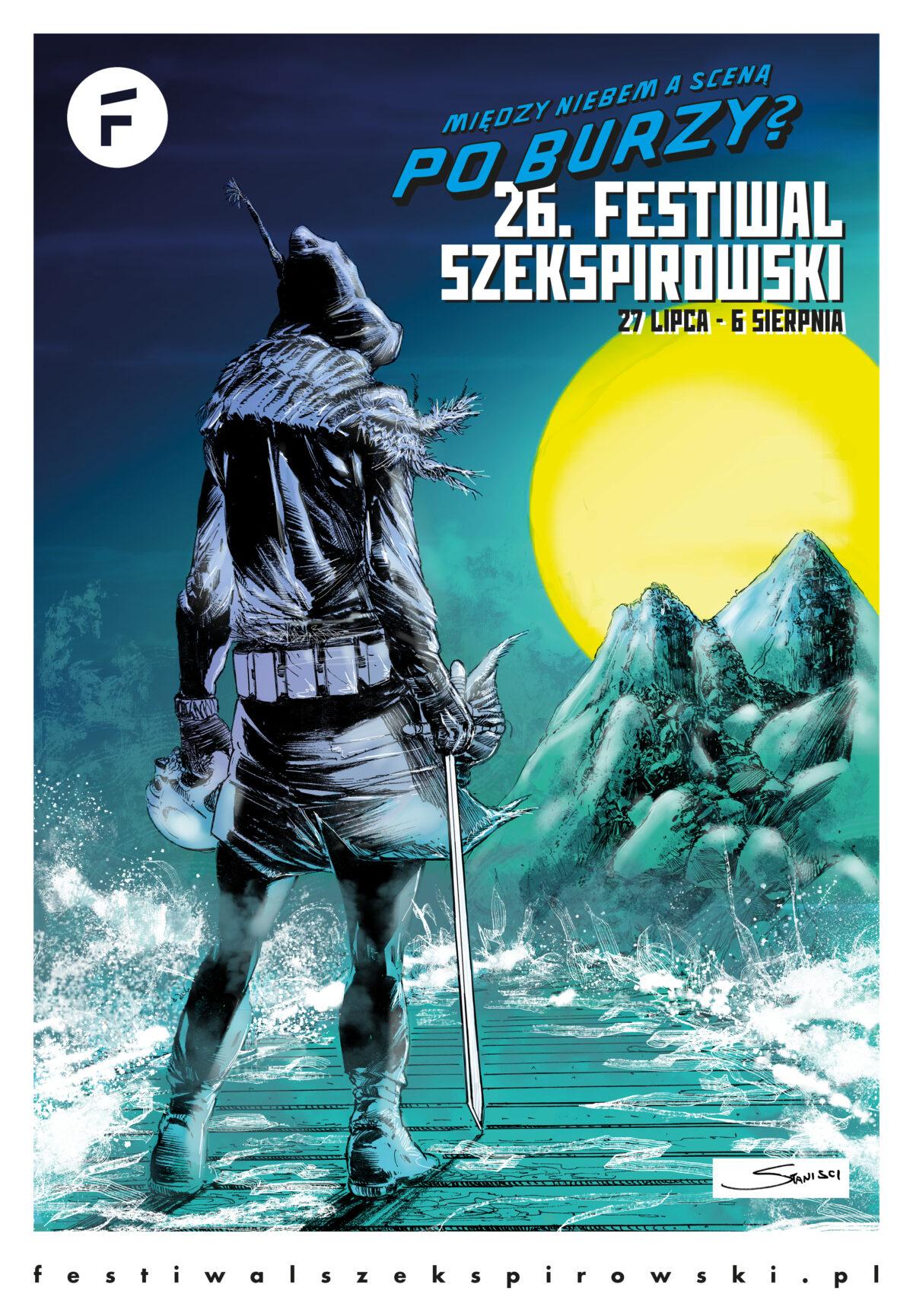 nextNational Pass and discounts for Ukrainians