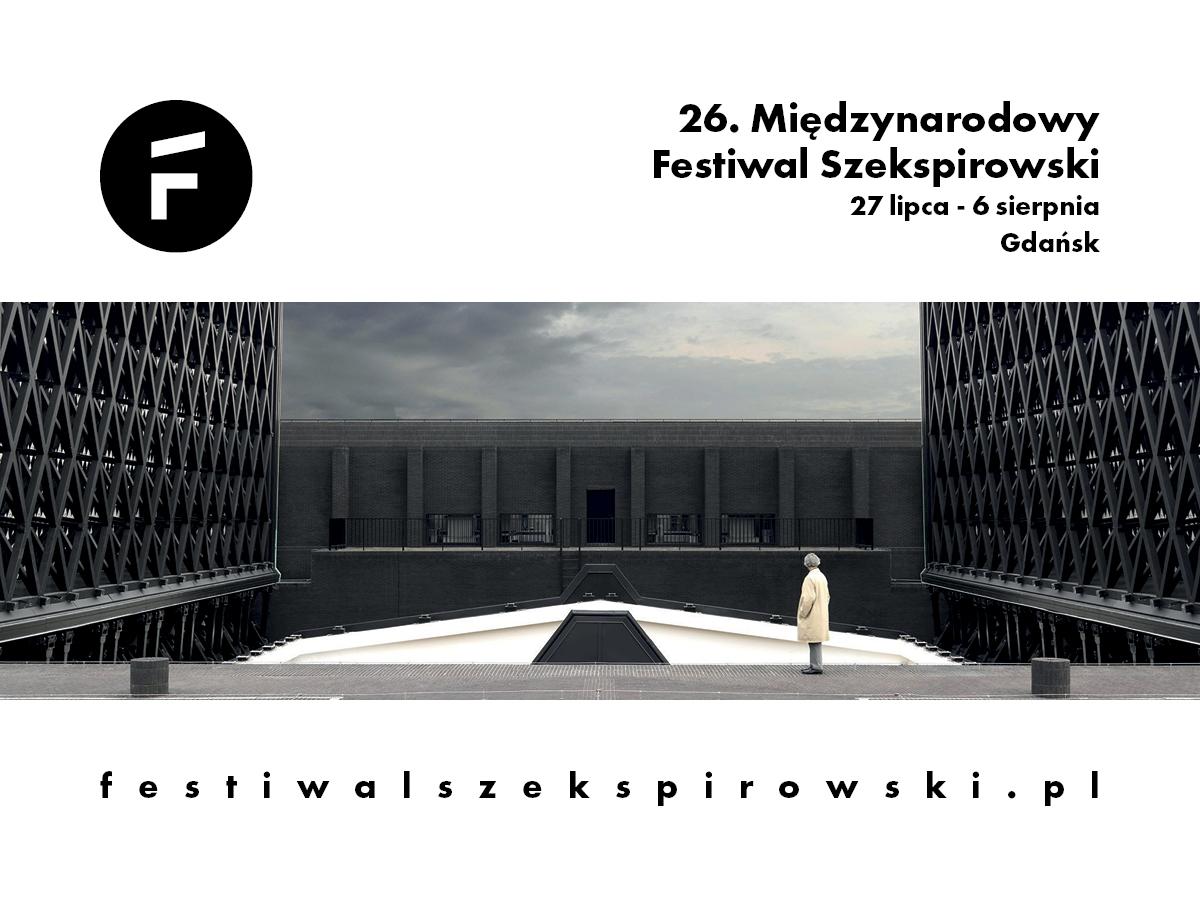 The 26th international Gdańsk Shakespeare Festival will be held on 27 July–6 August. Many new features are coming this year, with no less than 5 performances in the Golden Yorick finals, an international jury selecting the winners in two competitions, money prizes and increased production funding, along with a new motto to go with the entire event.

MOTTO OF THE FESTIVAL

“Between Heaven and the Stage. After the tempest?”

The motto of this year’s international Gdańsk Shakespeare Festival is a direct reference to the title of the book by Professor Jerzy Limon, a visionary, eminent Shakespeare scholar, creator of the Gdańsk Shakespeare Theatre and the Festival’s Director for 25 years. The question posed by the organisers in the motto’s second part is, on the one hand, a reference to the three extremely different international productions of The Tempest coming to the Festival and, on the other hand, to the tempests sweeping across the world: political, pandemic, climatic and those related to the human condition.

The international productions hosted at this year’s event have been selected by curator and theatre producer Joanna Klass: “It is ‘Between  Heaven and the Stage’ that negotiations will unfold between the Great Bard’s writing, specific directorial visions and every spectator’s subjective perception. We welcome performances created in various places around the world at a highly challenging time of multiple changes brought about by the pandemic. It is a time when the theatre has suffered the most out of all areas of art because, by definition, it is a community-based experience. On top of that, for several months now, we have been experiencing a theatre of war just across our border, a war both cruel and heroic that evokes many feelings, is charged with new meanings for each generation, delineates and transcends our limits of humanity, heroism and self-sacrifice. Only Shakespeare knew how to describe what to us would seem, quoting Adorno, impossible to describe—that now, after the experiences of the last war, words fail us in conveying the atrocities of the present. But despite these losses, despite the calamities, we have the right to a shared experience or, in fact, we absolutely need a shared experience of this Festival because we see again how theatre focuses on, explains and deconstructs all the stories that make Shakespeare our contemporary. There is no substitute for the communal experience or co-creation of theatre, nor can anything replace the communal viewing of a theatre performance as a spectator: amidst others who are strangers yet burst out laughing at the same time or hold their breath in delight or sadness.”

Every year, the loyal fans of the Festival look forward to seeing the season’s best Polish Shakespearean productions. Once again, their selection was entrusted to theatre critic Łukasz Drewniak, who chose as many as the five best ones out of all premiere performances dedicated to the work of William Shakespeare. One of them will win the Golden Yorick and PLN40,000, which is new compared to previous years, when the Golden Yorick was an honorary statuette only.

“The Golden Yorick is also an attempt to capture all the important changes taking place in the Polish reading of Shakespeare as they happen. The great value of this year’s Polish productions of Shakespeare is their genre diversity: the Stratfordian’s works have been translated into the language of dance and virtual reality technology, and filled with the omnipresent element of music. The telltale rise in the importance of Shakespeare’s comedies came from a need for laughter and an experience of absurdity, a distraction from the gloomy wartime and post-pandemic reality,” says Łukasz Drewniak.

ShakespeareOFF, which has been evolving dynamically in recent seasons, will also be a competition this year. Its aim is to invite artists and non-institutional groups for whom Shakespeare’s work is the point of departure in their projects. ShakespeareOFF is curated by Katarzyna Knychalska, founder and president of the Nie-Taki Theatre Foundation, Wrocław, publisher and editor-in-chief of the teatralny.pl web portal.

The format has been growing dynamically for three years now. And this time, there will be two strands competing for one prize: the ShakespeareOFF Statuette. The idea behind the first one, ShakespeareOFF Productions, is to select the three most exciting projects inspired by Shakespeare’s work and to support each of the finalists with a sum of PLN20,000 to produce the performances (in previous years, the funding was PLN10,000) which will be staged during the Festival. ShakespeareOFF Presentations, on the other hand, aims to show at least three of the most exciting, completed artistic events based on Shakespeare’s work, invited to the Festival by its curator.

“I’m especially happy that the Festival supports new independent productions both financially and logistically. It is still a very rare form of support for the off theatre community, while at the same time notably promoting the circulation of Shakespeare’s works in Poland, which is, after all, one of the main missions of the Gdańsk Shakespeare Theatre,” says Katarzyna Knychalska, Competition’s curator.

The Festival’s organisers decided that the performances participating in the Golden Yorick and both ShakespeareOFF strands will be judged by a single international jury, not divided into two separate groups.

“Our intent was to not differentiate between mainstream and off performances. We wanted our judges to have a full spectrum of what is going on in Polish theatre when it comes to interpretations of Shakespeare’s plays, both in institution-based and off culture,” adds Agata Grenda, Director of the Gdańsk Shakespeare Theatre.

Announced by the Festival’s organisers, the New Yorick Award aims to inspire the next generation of artists to read and stage the Stratfordian’s plays, to look to his work for answers to present-day problems and use it to test new theatrical forms. Three Polish theatres participate in the project: Wybrzeże Theatre, Gdańsk; Helena Modrzejewska Theatre, Legnica; and Zygmunt Hübner Powszechny Theatre, Warsaw. The competition is addressed to third-, fourth- and fifth-year students of the drama directing departments of Poland’s theatre academies and schools, and to directors with no more than three theatre productions to their name; it encourages them to adapt lesser-known works by Shakespeare.

Unfortunately, the award will not be presented at this year’s Festival.

Due to the insufficient number of directors’ entries submitted to the competition (four), the project partners were unable to carry out the award procedure of choosing the three best adaptations so they decided to postpone the selection of the three winning works until next season, taking into account those submitted this year or giving their creators an opportunity to re-enter the competition. Additionally, the authors of the works submitted this year will receive free passes to all Festival events.

“In collaboration with theatre academies, AST Kraków and AT Warsaw, we also want to launch the Shakespeare Master Class programme: a series of lectures and practical classes for young directors run by theatre and university gurus. We expect that these measures and the extended entry submission deadline will result in a satisfactory number of entries to the New Yorick Award, scheduled to be presented on 30 April 2023,” adds Agata Grenda.

Agata Grenda, Director, Gdańsk Shakespeare Theatre: “This is the first international Shakespeare Festival at our Theatre under my direction. Replacing Professor Limon as the Festival’s director seems very difficult, which is why I have had to find my own concept for this event. I wish to draw from the immeasurable source of inspiration that my predecessor left behind but I also put forward new ideas and an extended festival format, including an international jury. We live in such a dynamically changing reality that we are only able to ask questions, like the one in the Festival’s motto, because any answers, judgments or arguments undergo continuous transformations. By evoking the title of Professor Limon’s book, we want to point to the special role of theatre, which, on an ongoing basis, describes the chaotic world that drifts between the heavens and the stage. What will come after the tempest? And what is it about? If life is a theatre, then today we really need some outstanding directors. It is a time of heroes who will lead us through this historical turmoil. But the role of theatre is also to give joy and laughter. They allow us to keep our humanity, they give us hope and faith that the sun will come out after the storm. This is what this year’s Festival is about.